Thousands of us wrote to Moderna to protest against their decision not to share their vaccine. But instead of listening to the public, they’ve blocked our emails!

Since 2012, thousands of you have witnessed nearly one hundred films dedicated to the documentation, analysis, and celebration of the lives of the majority of the world’s population: the working class.  We’re excited to announce that the LLFF is back and it’s coming directly to your homes with our eagerly anticipated online platform.

Send your films to be exhibited on the website  http://www.londonlabourfilmfest.com/submit/

From: The Movement - Film

To Whom It May Concern,

Please find the link below to the trailer of “The Movement”.

Documentary exploring the current state of 'the movement' through the eyes of those close with overflowing experience, or young people with hidden answers on the true and growing failings of the movement flagged by complacency and arrogance.

Please do not hesitate to respond to email and quote: RESEARCH TEAM FOR THE MOVEMENT DOCUMENTARY

Please look out for special screenings advertised in 2022

“If we fight, we may win

but if we don't fight,

we will always lose.”

Be the first to see the best new film and TV from around the world.

The Capitalist War Being Waged on Disabled People

The Capitalist War Being Waged on Disabled People |18 Nov 2021 https://www.youtube.com/watch?v=K8ZBXaUXbhM

Novara Media
175K subscribers
SUBSCRIBE
Do progressives spend enough time challenging the multiple oppressions disabled people face? Have we taken the time to properly understand the models and frameworks that disabled activists use to guide their action, and comprehend the world? And have we properly considered how an exploration of the experience and treatment of disabled people could enhance our understanding of capitalism itself? Ellen Clifford thinks the answer to all these questions is “no". Ellen speaks to Michael Walker about her book “The War on Disabled People: Capitalism, Welfare and the Making of Human Catastrophe”, including an explanation of the Social Model of Disability, the history of the Disabled People’s Movement, and the disastrous consequences of austerity policies.
Posted by DON'T dis US at 05:20 No comments: 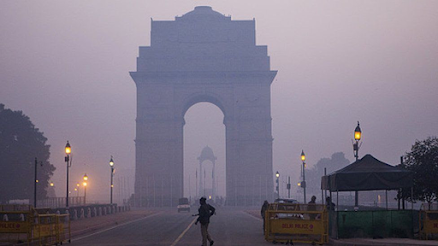 Authorities in the Indian capital, Delhi, have shut all schools and colleges indefinitely amid the worsening levels of air pollution.

Construction work has also been banned until 21 November but an exception has been made for transport and defence-related projects.

Only five of the 11 coal-based power plants in the city have been allowed to operate.

A toxic haze has smothered Delhi since the festival of Diwali.

The levels of PM2.5 - tiny particles that can clog people's lungs - in Delhi are far higher than the World Health Organization's (WHO) safety guidelines. Several parts of the city recorded figures close to or higher than 400 on Tuesday, which is categorised as "severe".

A figure between zero and 50 is considered "good", and between 51 and 100 is "satisfactory", according to the the air quality index or AQI.

Some schools had already shut last week because of pollution and the Delhi government said it was mulling over a lockdown to improve air quality as dense clouds of smog engulfed the city.

A mix of factors like vehicular and industrial emissions, dust and weather patterns make Delhi the world's most polluted capital. The air turns especially toxic in winter months as farmers in neighbouring states burn crop stubble. And fireworks during the festival of Diwali, which happens at the same time, only worsen the air quality. Low wind speed also plays a part as it traps the pollutants in the lower atmosphere.

Every year as winter approaches, there's a sense of déjà vu for us living in Delhi. The morning skies take on an ominous grey colour, we complain of stuffy nose and itchy eyes, and hospitals start to fill up with people complaining of wheezing and breathing difficulties. Those of us who can afford it, rush to buy expensive air purifiers. The mere act of breathing in Delhi becomes hazardous.

The city routinely tops the list of "world's most polluted capitals" and we obsessively start checking apps that provide a reading of the air quality index. We look at the levels of PM2.5, the lung-damaging tiny particles in the air that can exacerbate a host of health issues, including cancer and cardiac problems, and PM10 - slightly larger particles, but still pretty damaging.

Every year, as the air turns murky, the Indian Supreme Court hauls the state and federal governments into court, asking them what they intend to do to clean up the air. On Tuesday, after a prodding from the court, the authorities took some action.

But these measures are like putting a bandage on a bullet hole - they have been tried in the past and have made little difference to the city's air in the long term. Experts say cleaning up the air requires drastic measures that are not a priority for the country's leaders. They warn that at the onset of winter next year, we'll be back where we are now.

This year, the pollution has become so dire that it prompted a stern warning from India's Supreme Court, which directed state and federal governments to take "imminent and emergency" measures to tackle the problem.

Following the hearing, a meeting was called by Delhi's Commission for Air Quality Management and emergency measures were announced.

Other measures announced by the panel include a ban on the entry of trucks in Delhi and the neighbouring states of Uttar Pradesh, Punjab, Haryana and Rajasthan until 21 November, except those carrying essential commodities.

The panel also directed Delhi and other states to "encourage'' private offices to allow 50% of their employees to work from home during the period to cut down vehicle emissions and dust levels.

India's pollution problem is not just limited to Delhi.

Indian cities routinely dominate global pollution rankings and bad air kills more than a million people every year, a report by US research group, the Energy Policy Institute at the University of Chicago (EPIC), said. It added that north India breathes "pollution levels that are 10 times worse than those found anywhere else in the world" and, over time, these high levels have expanded to cover other parts of the country as well.

The Next Green Left Meetings

THE NEXT GREEN LEFT MEETING AGM SCHEDULED FOR 11/9/2021 ZOOM CODES from yrrumuk@googlemail.com