Facing the Apocalypse - Arguments for Ecosocialism: review by P. Murry 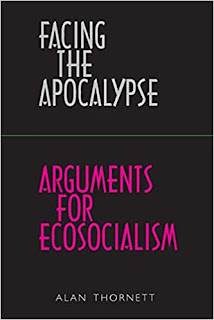 I’m not sure that Alan Thornett has written a totally comprehensive guide to Ecosocialism as an emerging political ideology in the second decade of the 21st century CE, or perhaps, the second or third century of the Anthropocene era. That task may need hindsight, and as argued throughout, that could be something we will not have the luxury to do in future.

Thornett is an important figure in the development of Ecosocialism, so this is a book written from a deep and urgent sense of commitment. It traces the intellectual roots of Ecosocialism in Marxism and other strands of radical thought, such as the work of Murray Bookchin, Hugo Blanco and the emergence of Green political ideologies and movements. To some extent this traces the author’s own journey from the productivism and blind faith in continual economic growth as progress that still characterises both capitalist and orthodox socialist perspectives on the world economy.

This book clearly details multiple reasons why such views are not only, no longer credible, but also deeply dangerous to the future of humanity and the interlinked ecosystem that it depends on. ‘Apocalypse’ in the title is not a rhetorical exaggeration and the multiple ways in which an accelerating apocalypse is starting to happen are addressed in this book with a refreshing lack of technical jargon.

Thornett covers not only the threat of human caused climate change, but many other ways in which industrialised human activities intensify ecological destruction. Pollution of water and rapid depletion of water resources, ocean acidification, aggregations of non-biodegradable garbage and other factors leading to species extinctions and dramatic losses of biodiversity; are only some of the areas which this book examines.

One issue, which is not dodged, even though it is very controversial in Green and socialist discourses, is human population growth. Often any discussion of this issue has led to not always unjustified accusations of Malthusianism, misanthropy and racism. Thornett devotes a lot of attention to this issue, including. as appendices, debates on the issue with thinkers such as Betsy Hartmann, Laurie Mazur, Ian Angus and Derek Wall. Overall the case is made that, even if population growth, may, as on some projections, trail off by about 2050 to about 9.5bn, it is still a major factor driving the ecological threats that the book details.  Therefore, it cannot be ignored, but it cannot be solved by compulsion, and any solution must involve extending the rights of women to control their own fertility.

This is an important book, an invaluable source for anyone interested in Ecosocialism. It is clearly written and thoroughly referenced and would probably make an excellent text to use in teaching ecological politics at degree and pre-degree level.

However, that is not its main purpose, it is a major contribution to the political debates and actions that must take to place in the struggle to contain and control the terrible global crisis that it so ably analyses. So, it does not just consider the origins of ecological dilemmas and ecosocialist perspectives, it also examines some suggestions towards solutions.

In Thornett’s view human ecological impacts pre-date capitalism and he also notes the vast, sometimes irreparable, ecological damage done by some productivist industrialising projects conducted by avowedly socialist regimes. ‘Maximalist’ arguments calling for an overthrow of capitalism before tackling ecological crisis are rejected. Thornett argues instead for: “Reforms which are not necessarily reformist, […], Such as opposing fossil energy and demanding renewables.” (p.98). Amongst those reforms examined are

From a British point of view the section on the contests around environmental politics that are currently going inside the British labour movement is a useful antidote to those right wing Greens who insist on seeing all Trade Unions and all of the Labour Party as completely unreconstructed advocates of industrial productivism and unceasing economic growth.

This review is only managing to scratch the surface of the many issues and arguments covered in the book; which is neither completely definitive nor flawless, but it is not meant to be. It is an important text in the continuing struggle for Ecosocialism. Obtain a copy by any means necessary.

The Next Green Left Meetings

THE NEXT GREEN LEFT MEETING AGM SCHEDULED FOR 11/9/2021 ZOOM CODES from yrrumuk@googlemail.com