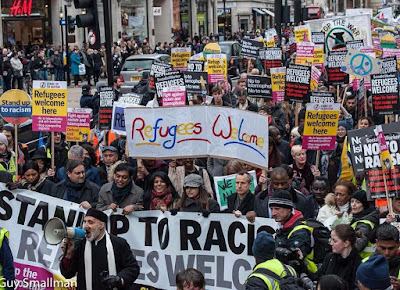 Amid a vitriolic atmosphere of anti-migrant hysteria following the EU referendum, Prime Minister Theresa May has announced she will trigger article 50 by the end of March 2017 in order to “have the freedom to choose the way we control immigration.”
In a situation where migrants, Muslim women and anyone considered to be ‘foreign’ are being attacked on a daily basis and refugees are being abandoned by Britain and Europe to destitution, drowning and exploitation, there has never been a more important time in recent history to stand up to racism.
On March 18th, let’s to make the Stand Up To Racism demonstration for UN Anti-Racism Day the biggest yet, to show that Theresa May does not speak for us when she blames migrants and refugees for the problems cause by austerity and the financial crisis, and that we are united against racism, Islamophobia and anti-Semitism
Over the past 4 years, Stand Up to Racism has organised protests in defence of migrants and refugees. At our recent conference, 1,500 participants – including Jeremy Corbyn, Diane Abbott, Lord Alf Dubs and others – launched a mass anti racist movement. Join us in London in March 2017 to stand up to racism together.
More details tbc
Organised by Stand Up to Racism
http://www.standuptoracism.org.uk/
Posted by DON'T dis US at 03:12